The Steamer Veturia had shipped a cargo of nitrates in Colon, Panama, and was bound for Hampton Roads, Virginia, but she never made the delivery.  Becoming lost in a dense early morning fog on February 20th, 1918 the ship stranded upon the Outer Diamond Shoals.  Immediately Captain Frank Mills realized that the British Steamer was in dire trouble as the ship was aground in shoal water and being heavily pounded by mounting seas.

A wireless broadcast by the stranded ship was received by the USCG Cutter Onodaga that was steaming nearby.  However, due to the dense fog, the cutter was not able to make contact with the Veturia until 13 hours later, around ten o'clock at night.  Even then, the cutter could not get any closer to the dying ship as she was hard aground and there were breaking seas all about her.  The rescue ship had to stand off over 200 yards away to stay in safe water and not meet the same fate as the stranded Veturia.  The Coasties lowered their boats and made several dangerous trips through the breaking seas to rescue all 47 men as well as the three cats that made up the crew of the now abandoned shipwreck.

The crew were taken to safety in Wilmington, NC, but the Veturia remained on the Outer Diamond Shoals where the waves of the Atlantic beat her to pieces, the weight of her steel dragging the ship down into the pure white sands of the Diamond Shoals.

Today, the Veturia is mainly covered by the shifting sand and is only exposed periodically.  When the winter storm waves and the fast currents of the Gulf Stream cross the wreck site they alternately cover or uncover the ship's remains.  Though the majority of the time the ship is tucked away from view by several feet of white sand, we have seen her exposed to a depth of 40 feet.  The wreck site is not difficult to locate, provide the wreck is exposed.  Due to the shallow depth, many parts of the wreck can be seen from the boat deck, especially the bow section and boilers.  If the wreck cannot be seen and the depth not over 30 feet, the wreck is covered with sand and not worth a dive attempt.

The ship is apparently still contiguous, but the majority of her lays beneath the sand with only the bow section, boilers, engine beds and stern fantail ever exposed.  The stern and engine area are separated by a fair distance and are usually not visible from one to the other.  A diver has to follow the trail of the prop shaft until it disappears into the sand, then continue on the same direction until the stern is reached.  This should only be attempted when the current is not running as the diver will not doubt find it very difficult to make their way back to the main wreck site without something to hold onto. 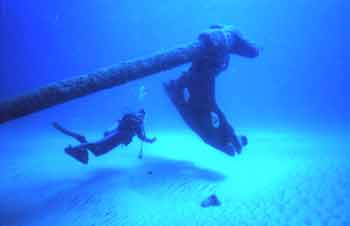 The wreck has been positively identified by the recovery of the ship's bell by diver Steve Lange of Hatteras.  The bell is a beautiful artifact engraved with the ship' name and home port.  A photo of his prize and more information on this wreck can be found in Gary Gentile's book, Shipwrecks of North Carolina from Hatteras Inlet North.  Additional information and some other very good photographs of the Veturia wreck site can be found on Paul Hudy's BFDC NC wreck diving site.